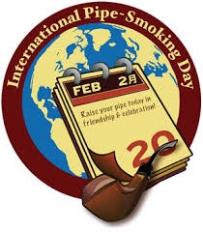 still life of pipe resting on tobacco in baccyflap

We all know that pipe smoking is supposed to be a relaxing activity.  But sometimes, whether it's the environment, the pipe, the tobacco or a host of other things, your smoking session turns into an hour of frustration.

Sometimes we have little control over the environment aspect, especially if we are unable to smoke indoors due to a loved one's request, or rules of the house/rental.  So we bundle up in the winter, find an overhanging roof when it's raining out, or swelter in the summer heat.  Your favourite pipe may not smoke the same when outside in the cold, with the lower temperatures creating excessive condensation in the shank and stem, necessitating judicious pipe cleaner activity.  My beloved Old Boy pipe lighter hates the colder temperatures, and refuses to light in even a gentle breeze. Wind can cause your tobacco to burn faster and hotter, changing (ruining?) the flavour of the blend. The wind can blow ash and embers all over your hands and clothes, burning small holes here and there.

Once in a while you'll find yourself with a delicious tobacco blend but due to the cut or moisture level the tobacco has a hard time burning. Long luxurious ribbons of Virginia tobaccos in a shag-cut blend are easy  to over pack in your pipe, plugging the draft hole and making you puff more vigorously to keep the pipe lit.  Flake tobaccos often will expand on lighting your pipe, so a perfectly packed pipe can quickly become too tight, frequently go out, and frustrate the smoker.  I had a broken flake tobacco once that took forever to get lit, provided a thin but tasty smoke, and always threatened to go out if not coaxed along constantly with pipe tamper and extra re-lights.  If I took the pipe from my lips for more than a minute, the fire was sure to die. This was not a relaxing smoke.

Do your best to buy quality pipes, that is, pipes that are constructed properly with an unrestricted draw, open mouthpieces, and well cured briar.  Make sure the pipe is clean, inside as well as outside.  An oxidized stem will taste foul and a blocked draft hole will cause you to puff harder to keep the fire lit in the bowl.  The pipe itself should have adequate rest between smokes and have the cake trimmed back to a reasonable thickness (I like less than a dime thick cake).

Prepare your tobacco.  It takes some experimentation to find out if a flake burns best fully rubbed out or folded and stuffed, which pipes work best with which tobacco etc. etc.  But, you can make sure that an over moist freshly opened tin of tobacco can have a chance to air out to the correct smoking humidity.

Pack the pipe properly, getting the tightness of the tobacco even, allowing for tobacco expansion if need be (refer to shag-cut tobaccos above).  Some tobaccos need to be packed in a bit tighter to get the correct draw, try different packing techniques until you find the one that works best for your pipe/tobacco combination.

Settle in, perform the false light, charring the entire surface of the tobacco.  Tamp the tobacco back down lightly, savour the taste on your tongue, have a sip of coffee of tea.  Strike another match and light the pipe again, this time making sure it's well lit and burning well, tamp lightly, and off you go.  Relax, puff, read a bit, puff...blow a smoke ring...relax. 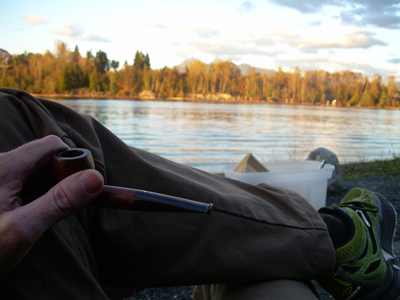 Old Dunhills and what made them so good (in my opinion, based on three (3) pipes) and other general observations

Dunhill. The name conjures up images of Olde London, staid English style, luxury and elegance.  I am not going to relate the history of the brand, recount all the patents, inventions and marketing used by Dunhill to increase market share.  I merely want to let you know that I believe their reputation for great smoking pipes is deserved, at least for the older pipes (before 1960 or so).

I feel somewhat qualified to comment on the quality of these pipes having been a pipe smoker for nearly 20 years, collecting a large range of pipes over that time and even made a few myself.  My collection has been graced with brands well regarded for their smoking qualities such as Radice, Castello, Ardor and Ashton (Bill Taylor vintage).  I have a number of artisan pipes including a couple from Stephen Downie, Vollmer and Nilsson, and Wolfgang Becker.  I have old pipes dating from the 1920's to the '60s from great English pipe making houses such as BBB, Comoy, DBL (Delacour Brothers) and of course Dunhill.

Two of the things that Dunhill came up with in order to create a better pipe has contributed more to their success than all their other innovations, in my opinion.  And one of them was not even meant to make the pipe smoke better. Way back in 1912, Dunhill created and patented the 'inner tube'.  The original purpose of the aluminum inner tube was to enable easier cleaning of the shank of the pipe.  Remember, this was before commercially available pipe cleaners.  Pipe smokers back then used feathers, metal wires or other things to clear out the shank and mouthpiece of their pipes. The inner tube was meant to be removed and replaced with a fresh clean one when the inside started to get plugged up with tars and tobacco ash.  But if you buy an old estate Dunhill pipe, almost without fail, there is no inner tube remaining in the pipe.  The previous owner had been using the pipe without it.  An unintended consequence of the introduction of the inner tube to nearly all Dunhill pipes was the assurance that the pipes were all drilled correctly, with matching draft holes in shank and stem, due to the need to fit the aluminum tube through the shank into the mouthpiece. Modern pipe makers ensure that the draft holes are drilled to 4mm (or in some cases, slightly larger) and align with the draft hole in the stem, maintaining an even volume of air flow all the way to the button.  These early Dunhills have similar drillings to modern pipes, once the inner tube is removed. Draft holes in the tenon and mortise are all aligned, the drilling is nice and open, and even though these are factory made pipes, each pipe had to meet the same strict quality criteria.

The other thing Dunhill did that made their pipes better than most of the competition is use high quality, hand cut vulcanite stems. The early Dunhills in my collection have fantastically comfortable mouthpieces.  Now, I am under no illusions that hand cut bits are always better than machine made blanks (I have hand cut 4 mouthpieces for pipes I've made myself, and while a couple of them are pretty good, the other two are worse than an average pre-molded bit) but Dunhills workers were able to consistently cut excellent mouthpieces.  The profile was very comfortable with unobtrusive but effective buttons, clean slots with good air flow, and open enough to pass a fluffy pipe cleaner easily.

Two pipes pictured, one a 64 year old piece made in a factory setting, the other a one year old pipe made by artisans.

I've only owned two newer Dunhill pipes (both from the mid '80s) and smoked one other Dunhill dating to the mid 1970s, so I have no opinion as to the smoking quality of their current production.  But compared to what else was readily available to the pipe man between the 1920s and the late '50s, I firmly believe Dunhill were worth their price, and can still be considered excellent pipes even compared to current artisan pipes.  The shapes may be a bit pedestrian, there is often little in the way of ornamentation, the grain is often middling at best, but as a smoking pipe, I think they are fantastic.